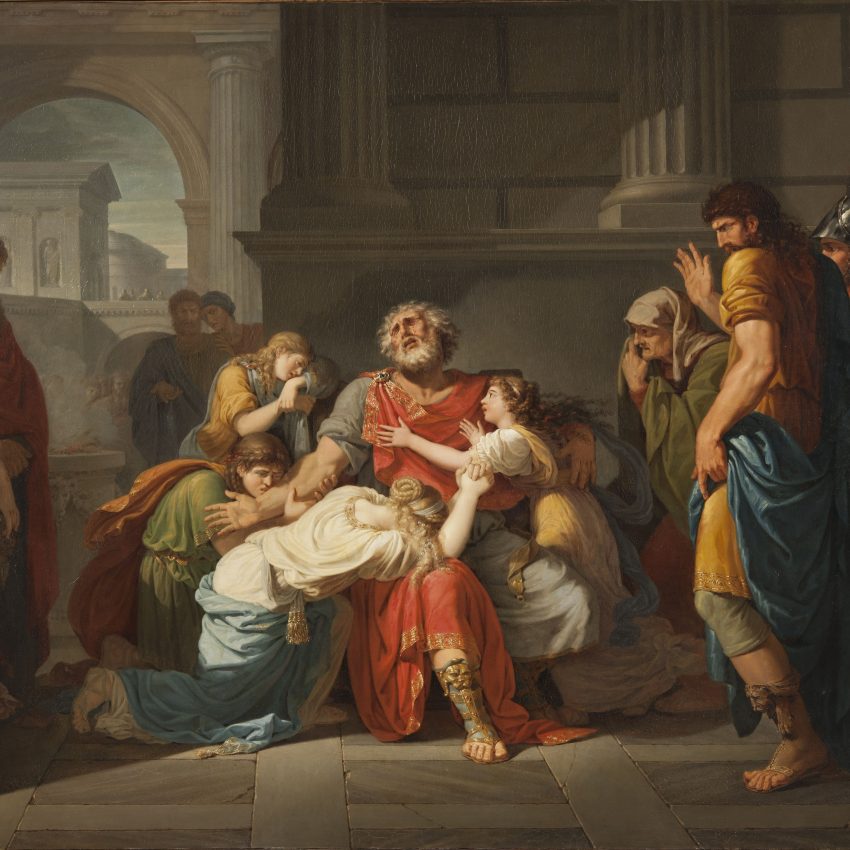 How did Oedipus Solve the Riddle of the Sphinx in Sophocles’ Play? 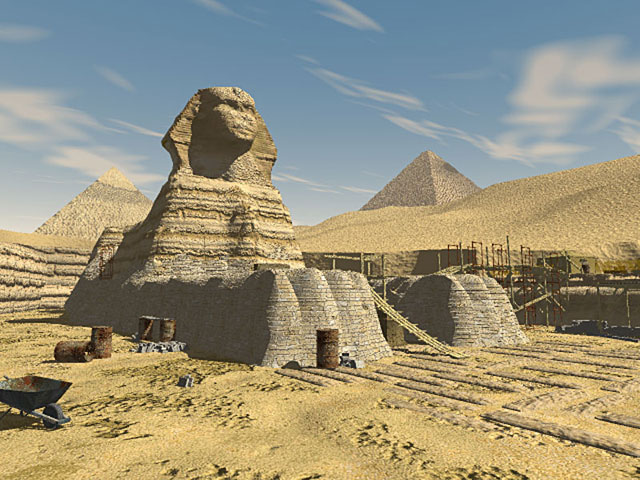 The Sphinx was a being with the head of a woman, the body of a lioness, the wings of an eagle, and the tail of a serpent. She guarded the entrance to the city of Thebes and would pose a riddle to travellers who aimed to enter. If they could not answer it, she would devour them.

It would seem that the Sphinx regarded the value of her life as bound up with having a riddle that no mortal could solve, for she killed herself because of Oedipus’ success in solving the Riddle of the Sphinx.

Riddle of the Sphinx

Man walks on 4 legs in the morning (crawling as a baby), 2 legs in the afternoon (walking upright throughout most of life), and 3 legs in the evening (using a cane in old age).

Oedipus was the first person to answer it correctly.

No one was ever capable of answering correctly… until one day, Oedipus came along. Oedipus was promised the hand of the princess should he interpret the riddle correctly.

As he was famous for his wisdom, Oedipus found the answer to the riddle with ease, replying:

“Man, who as a baby crawls on four legs, then walks on two legs as an adult and in old age walks with a cane as his third leg…”

When Oedipus answered the riddle correctly, the Sphinx was so upset that she fainted and Oedipus went on into Thebes. When he got there, the Thebans were very upset because somebody had killed their king, Laius. But they were happy to hear that Oedipus had figured out the riddle of the Sphinx. So, they made Oedipus their new king.

Oedipus was born to King Laius and Queen Jocasta of Thebes, but when Laius hears a prophecy that he will die at the hands of his son, he orders the child to be killed.

The infant is left on a mountain to die, but a shepherd finds him and takes him in, raising him as his own son and naming him Oedipus (literally ‘swollen feet’, from the pins that had bound the infant’s feet together when he was found). 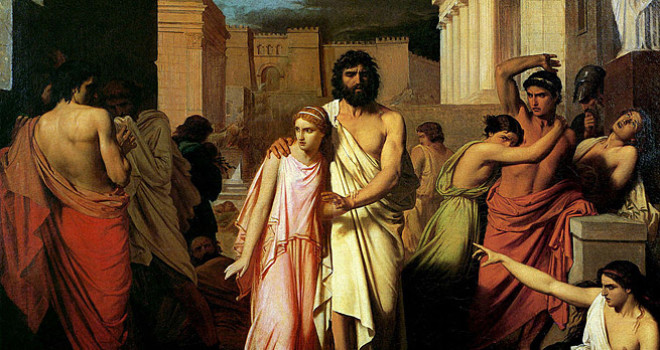 When he grows up in Corinth, Oedipus learns of the prophecy that he will kill his father and marry his mother, and thinking that the shepherd and his wife are his real parents, he flees the city in order to ensure such a fate never befalls them – only to run into his biological father, Laius, on his way to Thebes.

The two men fight and Laius is killed. Oedipus then arrives in Thebes to find that the king has recently been killed, but poor Swollen-Foot doesn’t think to put two and two together. Instead, he becomes king, marrying the widowed queen (whose name is – you’ve guessed it, Jocasta) and having children with her.

Later, Oedipus learns of what he has done, and blinds himself; Jocasta, upon learning that she’d borne her own grandchildren with her son, hangs herself.

The story of Oedipus gave Sigmund Freud, father of psychoanalysis, the idea for his theory of the Oedipus complex, where every male child harbors an unconscious desire to do precisely what Oedipus inadvertently did.

The child has to repress this desire but is often only partly successful (Shakespeare’s Hamlet, for instance, doesn’t fully manage it, according to Freud’s reading of the play – a fact that numerous theatre and film directors have seized upon, especially when portraying Hamlet’s frustration at his mother’s remarriage to his uncle).

But was this the only riddle Oedipus had to solve? Yes and no. In Sophocles’ play, probably the most famous retelling of the story, it certainly is. But some versions of the Oedipus story have a second riddle for him to solve.

Before reading ahead to the answer – yes, *spoiler alert* – can you cut through the Sphinx’s riddling talk and do as Oedipus did? (By solving the riddle, we mean, not the – er, other stuff.)

If such a family set-up sounds as unconventional as Oedipus’ own, then the answer at least puts us at our ease. The two sisters are ‘Day’ and ‘Night’.

Perhaps the Sphinx should perhaps have stopped at the first riddle. It was certainly her stronger material. And she did the right thing in choosing to open with it.

In Sophocles’ play Oedipus the King, Oedipus talks about his achievement. He converses with the blind seer Teiresias, who understands the language of birds and uses this ability to predict the future. Oedipus says: Her riddle was not something the first man to stroll along could solve – a prophet was required.

He also said and there the people saw your knowledge was no use – nothing from birds or picked up from the gods. But then I came, Oedipus, who knew nothing. Yet I finished her off, using my wits rather than relying on birds. From these quotations, it is evident that Oedipus is proud of his success in solving the riddle of the Sphinx.

But How did Oedipus Arrive at the Answer?

You might judge that this is a pointless question since his encounter with the Sphinx is surely fiction and the myths and plays about him do not provide us with information about this matter. Nevertheless, we can try to imagine how he solved the riddle and that is what I shall do here.

One possibility is that he realized the solution in a flash of inspiration. However, the Oedipus of Sophocles’ play, when faced with another puzzle – who killed Laius, the former King of Thebes? – tries to proceed methodically. 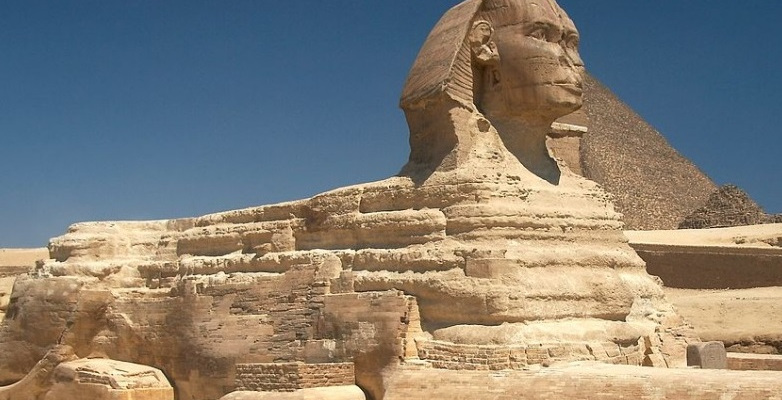 The most interesting accounts, I think, are ones that also represent Oedipus as trying to proceed methodically in the case of the Sphinx’s riddle. But it is not obvious how one would go about arriving at the answer methodically and to my knowledge, there have been no previous efforts to explain how.

In this article, I present two accounts of how Oedipus arrived at the answer. The first account as if Oedipus himself were providing us with it.

Here is the account. “When the Sphinx told me the riddle, I stared into space waiting for the answer to arrive, but no answer came into my mind. I then decided that the 3 only methodical way to proceed was to consider each kind of creature that I knew of in the hope of finding one which fits the description in the riddle.

I then set aside human beings and considered other kinds of beings. But after I had gone through every kind of creature that I knew, I still had no answer. I reasoned that there were two possibilities: either the answer is a kind of creature unknown to me or else the riddle has no answer.

There are some strange kinds of creatures in the world. Before me, was one of them: a creature with the head of a woman, the body of a lioness, the wings of an eagle, and the tail of a serpent.

Some other strange kinds of creature might not be known to me. So I could not rule out the first possibility. But I had no choice except to work with the knowledge I already had, which was little more than average.

So I began to consider the second possibility. Could it be that this riddle has no answer? That would make it no riddle at all. The only way in which I was ever going to make progress, I realized, is if I had grounds to reject the conclusion I had come to: that either the answer is a kind of creature unknown to me or the riddle has no answer.

But how could I reject this conclusion, since I had considered every kind of creature that I knew? I took this question seriously. It occurred to me that there is a way of rejecting it.

I had assumed that the description in the riddle was meant to be taken literally. The only way forward was to abandon that assumption. The possible metaphorical interpretations struck me as potentially endless.

But I am a determined person and was made even more determined by recognizing an 4 oversight in my reasoning. I returned to the kind of creature that I am: a human being.

That was the closest I had come to solving the riddle. I realized that ‘morning’ in the Sphinx’s question could refer to the early stage of human life, ‘afternoon’ to the adult years prior to old age, and ‘night’ to old age, when a human being often uses a walking stick.

That was how I solved the riddle.” You might think that any reasonably intelligent person who makes the observations Oedipus does about human beings would not set aside this kind of being and proceed to consider other kinds.

They would regard the observations as so promising that they would search for ways of interpreting the description in the riddle so that human beings fit the description.

That brings us to the second account. It begins in exactly the same way as the first account, but when Oedipus makes these observations, he looks for a way of interpreting the description so that there is a fit and thereby solves the riddle. In both accounts, there are three crucial steps that Oedipus takes towards solving the riddle.

First, he decides to proceed by carefully considering each kind of creature that he knows. Second, he notes that a human being (typically) moves on fours at an early stage of life and on twos later.

On both of the accounts given above, the solution arrives by first deciding to consider each kind of creature that one knows, carefully comparing it with the description provided in the riddle.

I doubt that most people would bother to proceed in this way. Almost all people would begin by pausing for a bit, waiting for the answer to strike them. It is very difficult to obtain an answer like this because whatever mental process is meant to deliver the answer will have to be sensitive to metaphorical interpretations.

When the process does not deliver the answer, I think most people would either start guessing or give up. It is possible that they would wonder whether the answer is a human being and then, in a flash of inspiration, see that it fits.

But I think it is unlikely that someone would focus on what is most near because there is a presumption that very familiar material gets ruled out when one pauses and waits for the answer to come.

Give us a share if you loved this write-up, thanks!